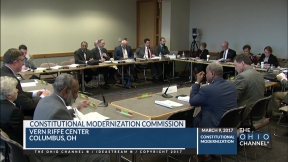 The Commission may hear a first presentation of reports and recommendations for no change to Article II, Sections 10 and 12 (Rights and Privileges of Members of the General Assembly), and Article V, Section 2a (Names on the Ballot).