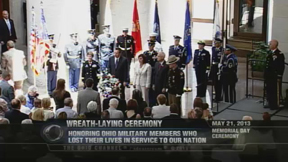 The ceremony honored the following service members who lost their lives in active service: