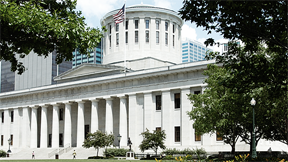 The Great Ohioan Award commemorates special Ohioans who have played a significant role in an event or series of events of lasting significance in World, American or Ohio history. Additional criteria includes being born in Ohio or lived in Ohio for a minimum of five years and at least 25 years have passed since the event, in which the nominee participated, is being commemorated.