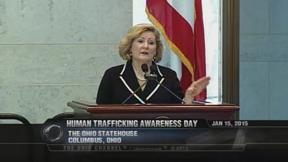 Each year in Ohio, more than 1,000 children are trafficked in the sex trade and over 3,000 youth are at risk of becoming victims. In March 2012, Governor Kasich established the Ohio Human Trafficking Task Force, which spearheads efforts to raise awareness of this issue, educate Ohioans on how to prevent the crime, and identify opportunities to assist victims of human trafficking. In June 2012, the passage of House Bill 262 raised penalties on human traffickers and put protections in place for human trafficking victims.