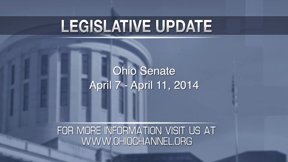 DVD : Legislative Update - April 7 - April 11, 2014
Legislative Update
Price :
$20.00
Quantity :
Add To Cart Watch Online
This program gives Ohioans a weekly update on legislation brought up for third consideration in the Ohio Senate and House of Representatives during the week of April 7th.

The Ohio Senate passed Substitute House Bill 296, sponsored by Representatives Johnson and Duffey, permitting schools and camps to procure and use epinephrine auto-injectors in accordance with prescribed policies and exempting them from licensing requirements.

Also passing this week was Senate Bill 283, sponsored by Senator Bacon, increasing the term length for the chairperson of the Governor's Council on People with Disabilities, and providing the Council with meeting space, equipment, and furniture.

Sponsored by Senator Bacon, Senate Bill 301 passed this week, designating the week in May each year that coincides with Armed Forces Week as "Ohio Warrior Awareness Week."

The Ohio Senate presented several resolutions during the week of April 7th.

In the Ohio House of Representatives, Amended Substitute Senate Bill 150 passed, sponsored by Senators Hite and Peterson. This bill revises the law governing the abatement of agricultural pollution, requires a person that applies fertilizer for the purposes of agricultural production to be certified to do so by the Director of Agriculture, makes other changes to the Agricultural Additives, Lime, and Fertilizer Law.

Also passed was Amended Substitute House Bill 483. Sponsored by Representative Amstutz, this bill makes operating and other appropriations and provides authorization and conditions for the operation of state programs.

Sponsored by Representative Sprague, Substitute House Bill 369 passed this week, relative to the administration, funding, and provision of mental health and addiction services.

Substitute House Bill 488 also passed this week, sponsored by Representatives Dovilla and Landis, requiring state institutions of higher education to award credit for military training and making other changes regarding state support and benefits for veterans and their spouses.

Sponsored by Representative Scherer, Amended House Bill 492 passed this week, providing authorization and conditions for the levy and administration of taxes.

The Ohio House presented several resolutions during the week of April 7th.

This has been your legislative update for the week of April 7th. You can catch live coverage of the Ohio House and Senate right here or at OhioChannel.org.