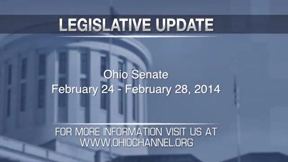 Also passed was Substitute House Bill 342, sponsored by Representatives Brenner and Driehaus. This bill permits an educational service center to be a partner or the lead applicant of an education consortium seeking a grant under the Straight A Program and modifies the goals of projects supported by the program.

Substitute House Bill 201, which also passed this week, was sponsored by Representative Butler and makes changes relative to mortgage subrogation and entries of satisfaction.

The Ohio House of Representatives presented several resolutions during the week of February 24th ...

This has been your legislative update for the week of February 24th. You can catch live coverage of the Ohio House and Senate right here or at OhioChannel.org.