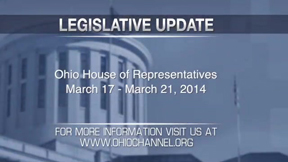 This is your Legislative Update for the week of March 17th.

The Ohio House of Representatives passed Senate Bill 222. This bill, sponsored by Senator LaRose, designates a portion of State Route 8 in the municipal corporation of Stow as the "Second Lieutenant David E. Rylander Memorial Highway."

Also passed was Amended Senate Bill 82, sponsored by Senators Balderson and Gentile. This bill authorizes a corrections commission of a multicounty, municipal-county, or multicounty-municipal correctional center to issue securities to pay the costs associated with certain improvements.

Amended Senate Bill 155 was also passed, sponsored by Senator Burke, authorizing a joint board of county commissioners to conduct proceedings regarding existing joint county ditches via teleconference or video conference.

Substitute House Bill 85, which also passed this week, was sponsored by Representatives Terhar and Gonzales, enhancing the homestead exemption for military veterans who are 100% disabled from a service-connected disability.

Amended House Bill 334 also passed this week. Sponsored by Representatives Hayes and Hottinger, this bill is relative to the expulsion of a student for actions that endanger the health and safety of other students or school employees.

Substitute House Bill 382 passed as well. This bill, sponsored by Representatives Duffey and Bishoff, revises the procedures and penalties governing the towing of motor vehicles under certain circumstances.

Amended House Bill 477 was passed as well. This bill, sponsored by Representative Brown, authorizes the conveyance of state-owned real property.

The Ohio House of Representatives presented several resolutions during the week of March 17th ....

This has been your legislative update for the week of March 17th. You can catch live coverage of the Ohio House and Senate right here or at OhioChannel.org.