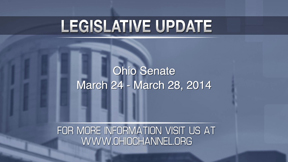 DVD : Legislative Update - March 24 - March 28, 2014
Legislative Update
Price :
$20.00
Quantity :
Add To Cart Watch Online
This program gives Ohioans a weekly update on legislation brought up for third consideration in the Ohio Senate and House of Representatives for the week of March 10th.

In the Ohio Senate, Amended Substitute House Bill 261 passed this week, sponsored by Representatives Butler and Stinziano, relative to court of claims operations and procedures for judge disqualification.

In the Ohio House of Representatives, Amended House Bill 336 passed this week, sponsored by Representatives O'Brien and Hall, creating the Gaseous Fuel Vehicle Conversion Program, encouraging the use of alternative motor fuel.

Sponsored by Senator Eklund, Amended Senate Bill 179 passed, including recycled water as a private water system for purposes of regulation by the Department of Health and boards of health.

Also passed this week was Substitute House Bill 162, sponsored by Representatives Dovilla and Anielski. This bill adds extortion, perjury, and certain federal offenses to the list of offenses committed by a public retirement system member that may result in forfeiture of retirement system benefits.

House Bill 373 also passed this week. Sponsored by Representative Terhar, this bill designates a portion of State Route 264 within the city of Cincinnati as the "Elder High School Vietnam Veterans Memorial Highway" .

Amended House Bill 402 was passed as well, sponsored by Representatives Duffey and Landis, requiring the Tax Commissioner to notify taxpayers of tax or fee overpayments.

This has been your legislative update for the week of March 24th. You can catch live coverage of the Ohio House and Senate right here or at OhioChannel.org.