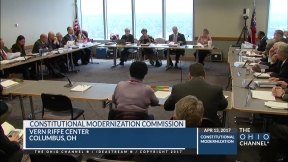 The report and recommendation regarding the grand jury will require a second presentation before a vote may be taken.