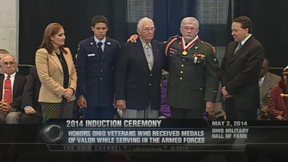 These remarkable Ohioans have all gone above and beyond the call of duty and performed heroically in specific combat actions against armed enemies of the United States of America.