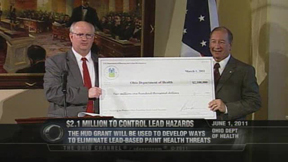 Housing built before 1950 poses the greatest lead hazard to young children. Out of the estimated 906,000 children in Ohio between 6 months and 6 years of age, 36 percent live in housing built prior to 1950. If lead is identified in a home, the only way to ensure children are not exposed is for the family to move or have the lead professionally controlled or abated.

The project targets 30 Appalachian counties and six counties in Northwest Ohio. Work has already begun to qualify families whose properties are under a lead hazard control order. The project will also pair the grant dollars with more than $300,000 dedicated by community action agencies to make homes lead-safe, weatherized and energy efficient.

In addition to the federal award, the Ohio Department of Development provided $200,000 and the Ohio Housing Finance Agency committed $100,000 for the project.

Families interested in applying for the project can contact the ODH Healthy Homes Program by calling 1-877-LEAD-SAFE.